The Training Principle Of Increasing Specificity

The basic premise of this principle of increasing specificity

Form ever follows function. This is the law.

What does this quote have to do with training?

One thing that is as important in training, as in building skyscrapers is, that form ever follows function.

Adaptation is specific to a stimulus, and that stimulus can either be training or competition. Competition is a very strong stimulus as well. That explains why form follows function, where form refers to the adaptation and function to the stimulus, or the other way around, whatever stimulus you set, the adaptation will follow.

The biological basis for this specificity principle of training

There is the so-called SAID principle, which stands for specific adaptations to imposed demands. Which means that within an organism, structures are formed directly in correlation to what they are meant to do.

Within an organism, structures are formed directly in correlation to what they are meant to do.

The body adapts to the stimulus, and that stimulus can be neurological, metabolic, muscular, or biomechanical.

Again, form follows function. The adaptation will be specific to the stimulus you set.

The practical application of the training principle of increasing specificity

Why is that important?

In this case, whilst specificity has its place, it’s not the basis for training. Everyone likes the idea of specificity and training has to be specific, but it’s actually an increase in specificity. 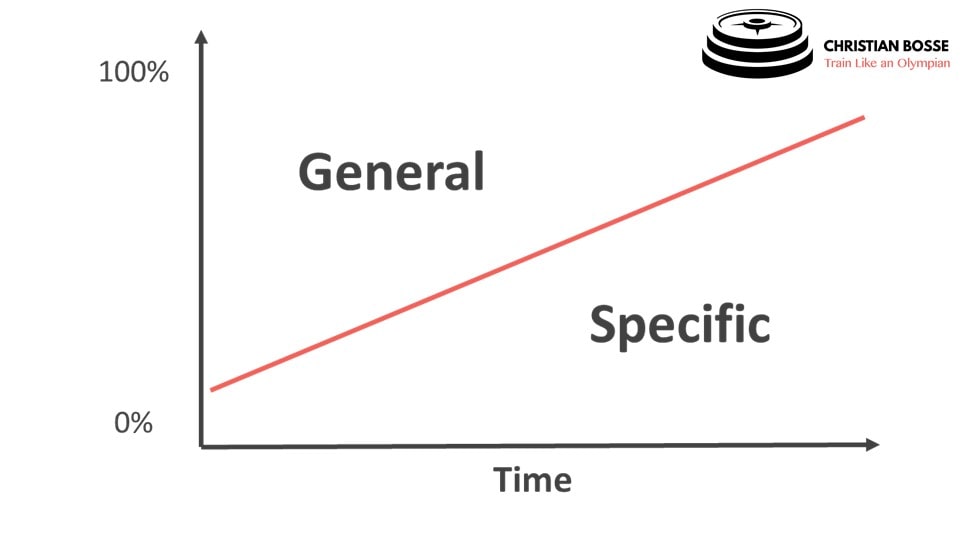 On the y axis, there are arbitrary units from 0 to 100% and on the x-axis is the time. Here you can see that specificity increases through time.

Now the question is, how long is that time?

I outlined in one of the previous articles, the training principle of periodization and cyclization, how long training phases can last or should last, based on the residual effects, the ceiling effects, and initial effects.

And I also outlined the long-term athlete development model, that my former colleague Terry Peters and I have developed.

So in consequence, these time periods can be weeks, as the examples of the mesocycles, or years as in the example of the long-term athlete development model.

All that is good, but what is specificity in the first place?

Very often people think specificity is what looks as if it is very specific. But it’s not.

One of the best explanations of specificity I have found is from Verkhoshansky, called Dynamic Correspondence. And he came up with five factors, five considerations for what could be specific

Some people have expanded on his model and also included the energy system contribution.

Rounding up the training principle of increasing specificity

The principle of increasing specificity explains that the adaptation is very specific to the stimulus you set, which is often referred to the expression ‘form follows function.’

The biological basis for this principle of training is the SAID (specific adaptations to imposed demands) principle and practically applied training has to be increasingly specific. That can be throughout different mesocycles or even over multiple years.

Check out the next page The Training Principle Of Interdependency