The principle of individuality is one of the most misunderstood training principles, and in addition, very often overrated in its’ importance.

At the core of this principle stands the premise that you can’t make a donkey into a racehorse. 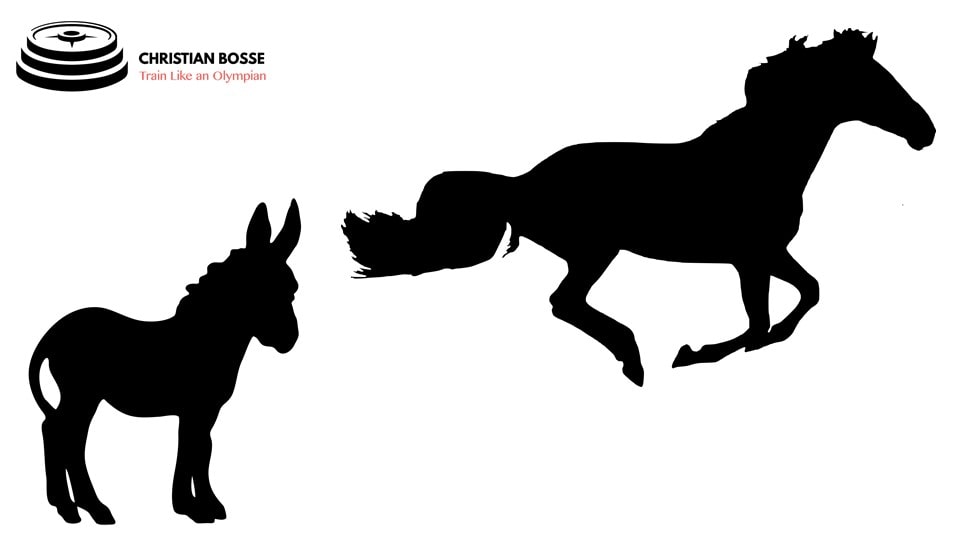 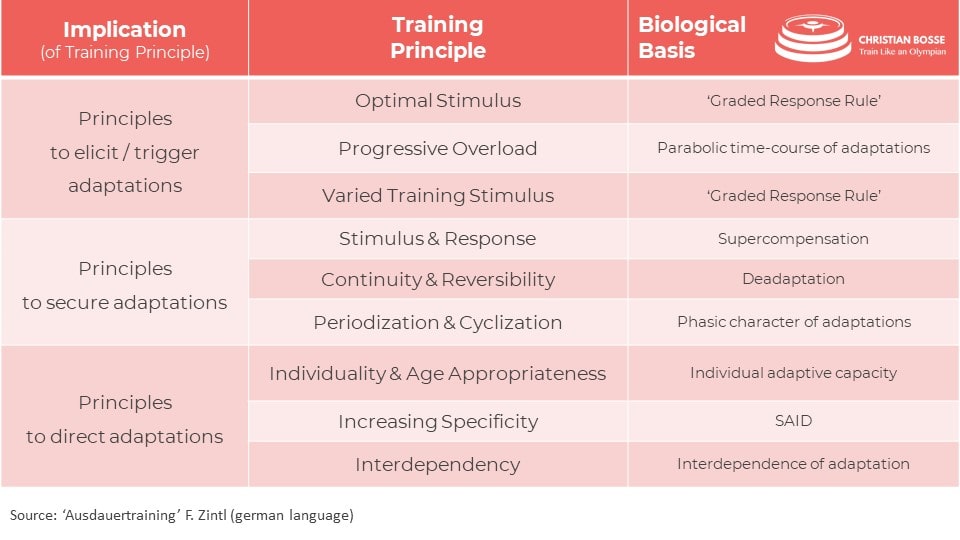 By looking at this table, you realize that the quote-unquote individuality principle is part of the ‘training principles to direct adaptations’, hence, you need to elicit an adaptation, and you need to secure adaptations, before thinking about individualizing.

The basic premise of the principle of individuality and age-appropriateness

The performance of an athlete is the sum of an interplay of different factors.

For an optimal development of an athlete, these different factors need to be considered and addressed.

What are these factors?

What is the basic premise for the claim of individuality

In very simple terms individuality can be broken down into nature and nurture.

Nature can be genetic inheritance and predispositions as well as biological factors such as anthropometry, whilst nurture are external factors, that could be upbringing and education, experience, behavior.

What is the basic premise for the claim of age appropriateness

The World Health Organization stated in their position paper in 2008, ‘Children are not mini-adults and therefore, they should not be treated like adults.’

Children are not mini-adults and therefore, they should not be treated like adults.

Hence children are unique in many ways and different from adults, and therefore require different treatments, in the broadest sense of the word.

The underlying biological principle is that there is so-called individual adaptability.

I have outlined that, according to Kraemer and Zatsiorsky (and myself), adaptation as the biological principle is the main rule of training.

What’s the biological basis for individuality

In essence, the individual adaptability, the magnitude, and the maximal functional capacity is different between individuals is why you can’t make a donkey into a racehorse.

First things first, during adolescence, the human goes through different stages of growth and development.

And what’s the difference between growth and development?

Growth refers to the measurable physical change of a human, check out this simplified image of the growth curve of a human 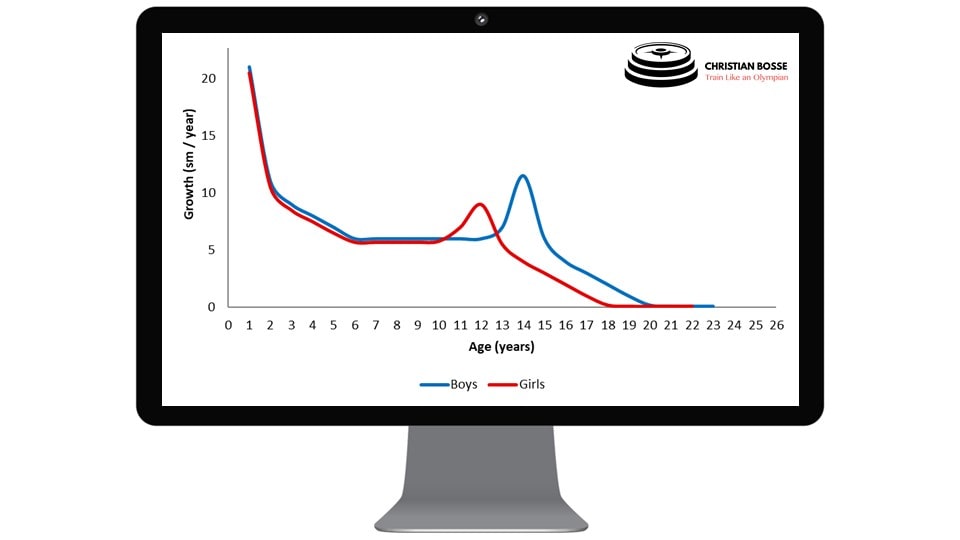 In this growth curve of a human, you can clearly see that growth, and rates of growth, change through adolescence.

It is important to note, that the growth rates vary between genders, girls mature a bit earlier than boys, and also the magnitude varies. The magnitude is higher in boys compared to girls.

And to bring things together, there is also a combination of age appropriateness and individuality, meaning different individuals go through this growth differently. The majority of adolescents are the so-called ‘normal developers’, but there are also ‘early developers’, also called accelerated in their growth, and there are also ‘late developers’ also called retarded in development. Retarded refers to growth, not the mental development.

Check out this simplified image on different rates of growth, and ‘early developers’, ‘normal developers’ and ‘late developers’. 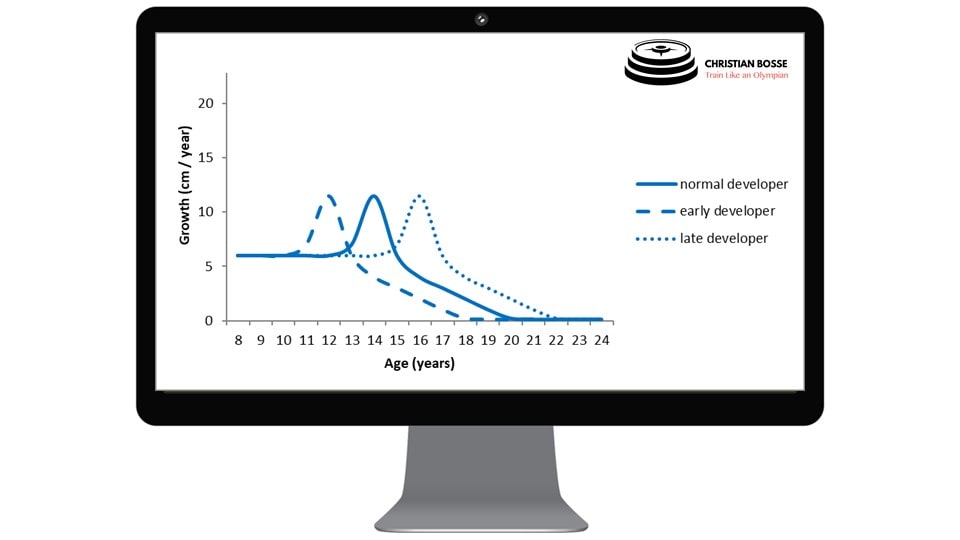 And very simplified development refers to the cognitive, functional, and emotional change during the different stages.

This is an entire topic in itself and would go beyond the scope of this article, so stay tuned for future updates.

The practical application of the principle of individuality and age-appropriateness

I know people will love this image, because it’s very, very complicated, and people like complicated things.

This is a model from Professor Dr. Tidow, and I was fortunate to learn under him during the early days in my studies. Professor Tidow came up with the idea that there are different adaptive types and developed the following model. 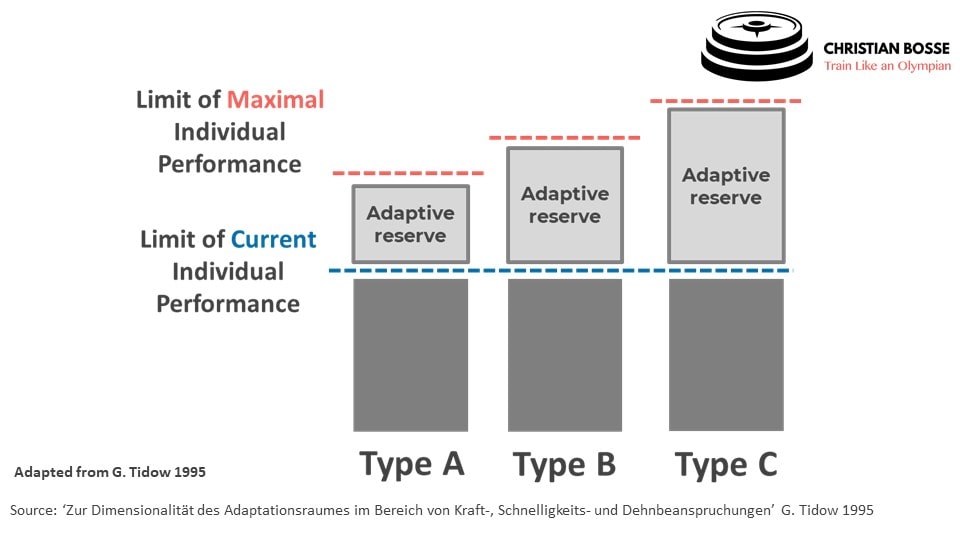 Basically, there are 3 different types, type A, type B, and type C, and there’s a limit of the current individual performance.

I myself am a bit unsure, whether the 3-month, 5-month, and 7-month hold true for different types of adaptations. You saw in previous articles, that different subsystems go through the adaptive process at different rates.

However, essentially this model explains that the individual adaptability is different. The magnitude is different, and the maximum functional capacity.

A different magnitude also means that the maximal functional capacity is different between, Type A, Type B, and Type C.

What does all this mean?

You can’t make a donkey into a racehorse, but you can make the donkey into the best donkey it could possibly be.

The bottom-line again is, that you can’t make a donkey into a racehorse but there’s a big but. And this is what we have to do as coaches, you can make the donkey into the best donkey it could possibly be.

I outlined that the basic premise is that children are not little adults, and therefore they shouldn’t be treated like adults.

This is a practical example, of what I’ve done with a former colleague of mine, Terry Peters [credit where credit is due], where we looked at the structure in a professional football club. 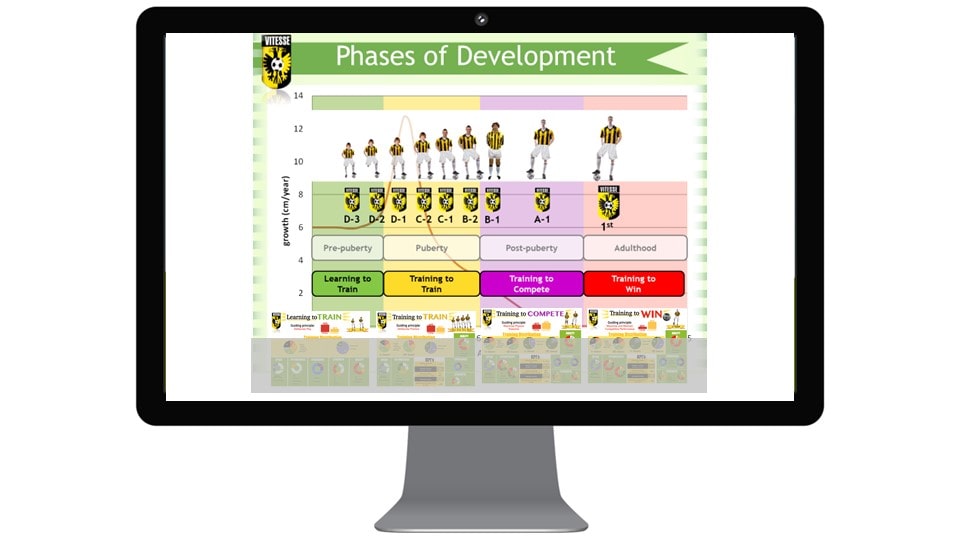 And we looked at how should training be done in through the different age groups.

Unfortunately, too often, you see that the training of the younger age groups is a trimmed-down version of what the professionals do.

Unfortunately, too often, you see that the training of the younger age groups is a trimmed-down version of what the professionals do.

And again, what did WHO say?

Children are not mini-adults. So the question stands out, why should the children and youth athletes train the same as the adult athletes?

The idea again is, children are not mini-adults and they have to go through a different training regimen, which is appropriate to their age, their stage of growth, and their stage of development.

Rounding up the training principle of individuality and age-appropriateness

The principle of individuality and age appropriateness is based on the premise that individuality is influenced by nature and nurture, and that the growth and development of adolescents are simply different from adults.

And in order to maximize training results, you need to consider and address these different factors.

Check out the next page The Training Principle Of Increasing Specificity