If executed correctly, the Power Snatch is such a nice and impressive movement to watch, isn’t it?

If you have ever tried to Power Snatch, you have found out it’s more difficult to execute, as it looks.

Not only does it look impressive, you might have also heard people, that the Power Snatch can reap a lot of benefits.

The questions emerge What Power Snatches train? And is it worth to put the effort and time in to learn that movement?

This article and video discusses

One model, I am using is to look at different levels.

I look at the

Let’s go through that step by step.

What Power Snatches train on a neuromuscular level

Any kind of Olympic Lift and its’ derivative is performed explosively and the Power Snatch even more. From a biomechanical point, the Power Snatch shows the highest barbell velocity out of all lifts.

The Power Snatch is typically trained with high intensity, an explosive effort, and few repetitions.

The Power Snatch is typically trained with high intensity, an explosive effort, and few repetitions.

Check out the differences between strength and power in the article

Consequently, on the neural level, the Power Snatches train the rate of recruitment and the firing frequency.

What Power Snatches train on a metabolic level

Metabolic just refers to the main energy systems that are used, whilst when you hear the word metabolic, the first thing that comes to mind is probably metabolic conditioning with higher repetitions.

However, the Power Snatch is usually trained with high intensities, an explosive effort and low repetitions, which targets the ATP-CP system or Phosphagen system.

The ATP-CP system provides large amounts of energy for a limited period of time, specifically for up to 6 – 10 seconds and requires longer periods of rest to be replenished, 90% is replenished after 60 seconds, whilst full replenishment can take 3 – 5 minutes.

Check out this video, that explains the different energy systems well.

If you want to read up more on energy systems, check out the article

Are there exceptions to the rule?

Yes, as I mentioned, the outline applies, if you train Power Snatches with high intensity, explosive efforts, low repetitions and complete rest.

If you chose to train Power Snatches with higher repetitions and incomplete rest, you will target a different energy system.

However, you will also have to deal with the negative consequences of such a training approach, such as technical breakdown and consequently training and repeating a technical flaw, which might manifest in a flawed Power Snatch technique.

If you chose to train Power Snatches with higher repetitions,  you will also have to deal with the negative consequences of such a training approach, such as technical breakdown and consequently training and repeating a technical flaw, which might manifest in a flawed Power Snatch technique.

What Power Snatches train on a movement level or technical level

This triple extension and triple flexion can also be found in many sporting movements, such as running, jumping (and landing), throwing, kicking, changing direction and a few more. This is why the Power Snatch is such a valuable exercise for athletes (if you know how to execute the exercise correctly).

For more information on fundamental movements, check out the article

For more information on the Power Snatch technique, check out the articles

Also check out this short tutorial which showcases the movement of the Snatch really well.

What movements do Power Snatches train?

Power Snatches train a series of fundamental movements, such as bending or hinging, squatting, pulling and stabilizing.

Power Snatches train a series of fundamental movements, such as bending or hinging, squatting, pulling and stabilizing.

The successful execution of a Power Snatch requires a powerful triple extension and triple flexion, which makes it a valuable exercise for most athletes.

What Power Snatches train on a muscular level

Whilst I am a strong believer in the approach of ‘train movements, not muscles’, which I think is attributed to Vern Gambetta and refers to the thought that we should much rather teach and coach our athletes how to move effectively, than how to activate certain muscles in isolation.

However, understanding the muscular activation and sequence or order of activation is helpful in the coaching process.

The Power Snatch trains almost all muscle groups of the lower body and targets the posterior chain, such as hamstring, glutes and lower back.

Also for the upper body, it mainly targets the posterior chain and shoulder girdle.

Check out the image below, where I give an indication of the major muscle groups involved in the movement and the muscular action during the different phases of the Power Snatch and Snatch. Of course there are many more muscles and muscle groups involved, which would probably go far beyond the scope of this article, however, I believe it provides a good outline. 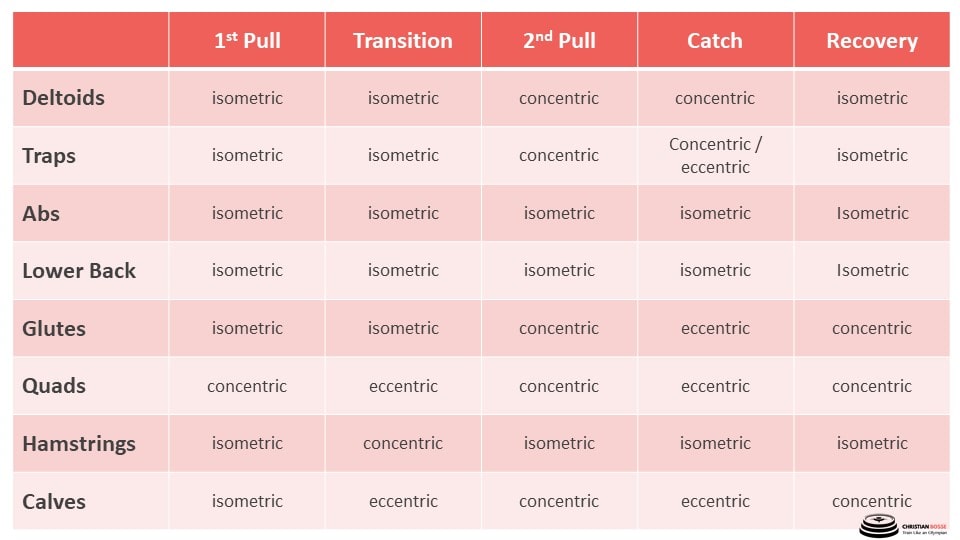 So, what’s the bottom-line on the Power Snatch muscle worked?

The Power Snatches train mainly the posterior chain of the lower body, the back and shoulder girdle, which is a very good complimentary exercise to our daily tasks, that mainly happens in front of us.

The Power Snatch requires a high contribution of the ATP-CP energy system, which offers a lot of energy, for a short period of time.

Power Snatches train a series of fundamental movements, a powerful triple extension and triple flexion, which makes it a great exercise if you engage in a sport that requires you to either, jump and land, sprint, change direction, hit, kick or throw.

The Power Snatch activates the muscle of the posterior chain, back and shoulder girdle.