The Training Principle Of An Optimal Stimulus

Have you seen people in the gym torturing themselves, training to muscular failure and beyond, and don’t really make any progress?

This is exactly what it means to disregard the training principle of an optimal stimulus, or as the famous bodybuilder Lee Haney said ‘Stimulate, don’t annihilate.’ 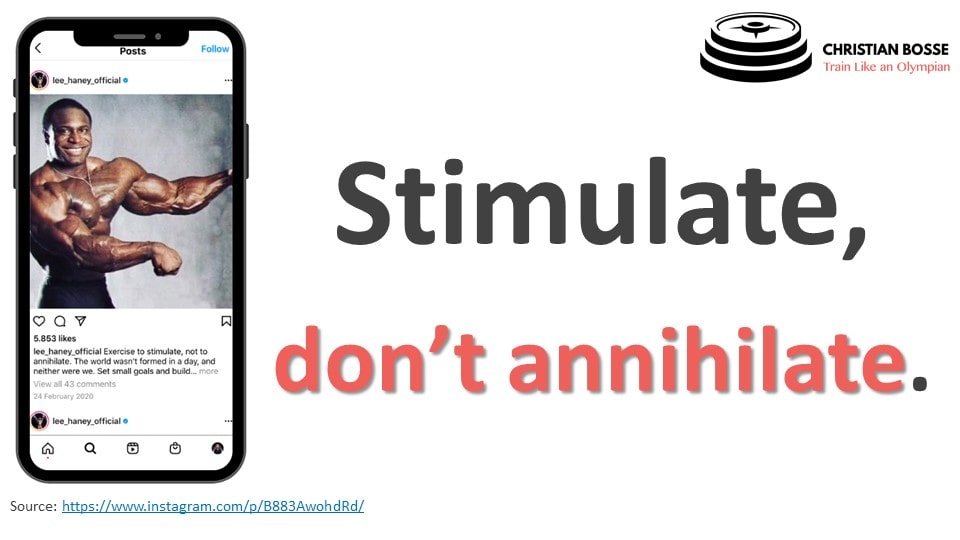 In this article you’ll learn

The basic premise of the training principle of an optimal stimulus

As previously discussed, the famous bodybuilder Lee Haney said ‘Stimulate, don’t annihilate.’ By which he meant, that training is supposed to set a stimulus for your body to adapt.

However, the stimulus must have a certain intensity level or must be above a certain threshold in order to elicit an adaptation.

The stimulus must be above a certain threshold in order to elicit an adaptation.

I explained previously, that adaptation is the main law of training, and I showcased the story of Prometheus, who stole the fire from Zeus, and as a punishment Zeus chained him to the cliffs, where an eagle came to pick out the liver every evening and overnight, the wound would heal and the next day the eagle came again and the cycle repeated.

And we also said that adaptation is the main law of training (from Kraemer and Zatsiorsky) and everything we do in training is geared towards eliciting an adaptation.

The biological basis for this training principle of an optimal stimulus

What does it mean?

Check out this model, where I tried to represent Wilhelm Roux’s graded response rule, where you have a high stimulus, moderate stimulus, a low stimulus, and then there can actually be a very low or below stimulus. 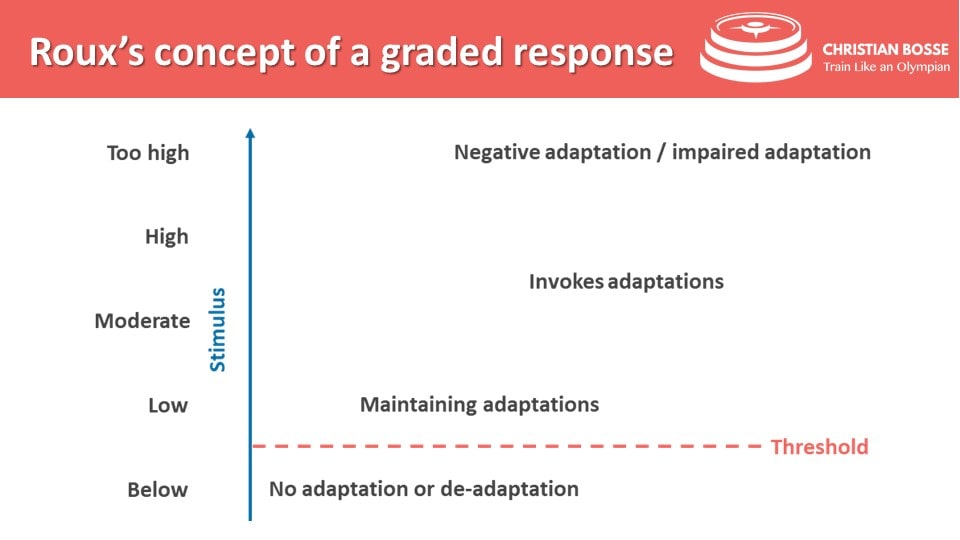 And now you can think about Lee Haney again, that’s what he meant, when he said ‘Stimulate don’t annihilate.’

The practical application of the training principle of an optimal stimulus

If you look at the graded response rule, you can see there is an ideal training zone, that’s where the optimal stimulus actually is. 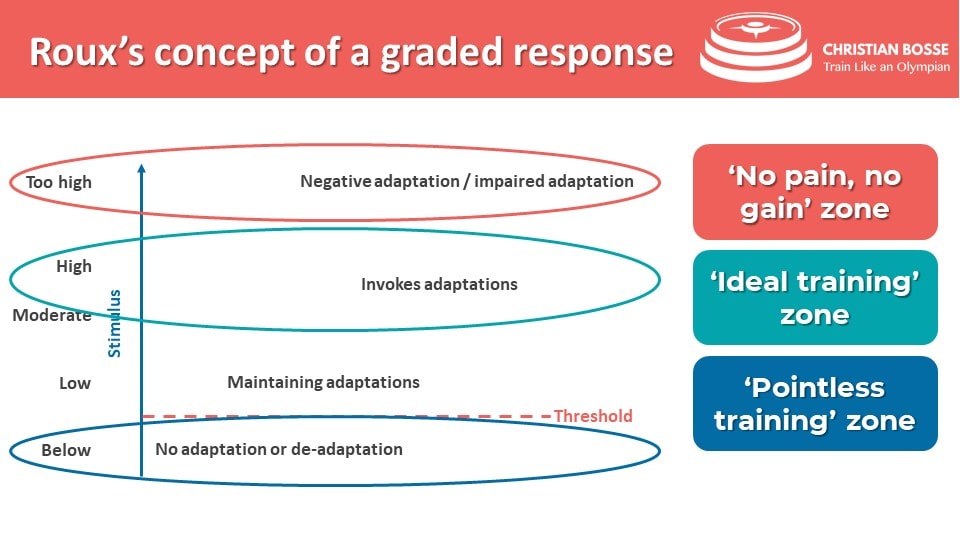 Training Zones According To the Graded Response Rule

Whilst this image might seem funny, the shocking truth is, that you won’t believe how many pointless trainings I’ve seen in my life.

And I really believe if you understand that graded response rule, and take to heart that adaptation is the main thing that you want to get out of your training, then you won’t to do pointless trainings.

Do you want to avoid doing pointless trainings?

This is a graphic from my main course, the Strength Training Secrets. 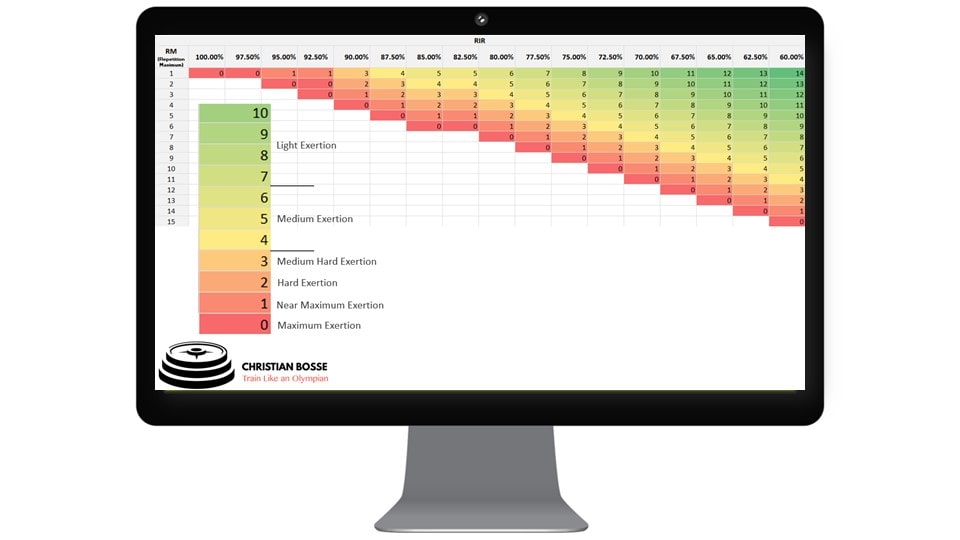 It shows different exertion levels at different intensities, and different rep ranges. There’s the light exertion going up all the way to a maximum exertion. And that can be expressed in the RPE (rate of perceived exertion) and RIR (reps in reserve).

Near-maximum exertion is an RPE of 8.5 to 9, which equates to one rep in reserve. That could mean you do three reps and you could do the fourth rep, that is an RPE of 9, with reps in reserve of 1.

How could that look in a training program?

Check out this image of an example a 4-week strength training plan. 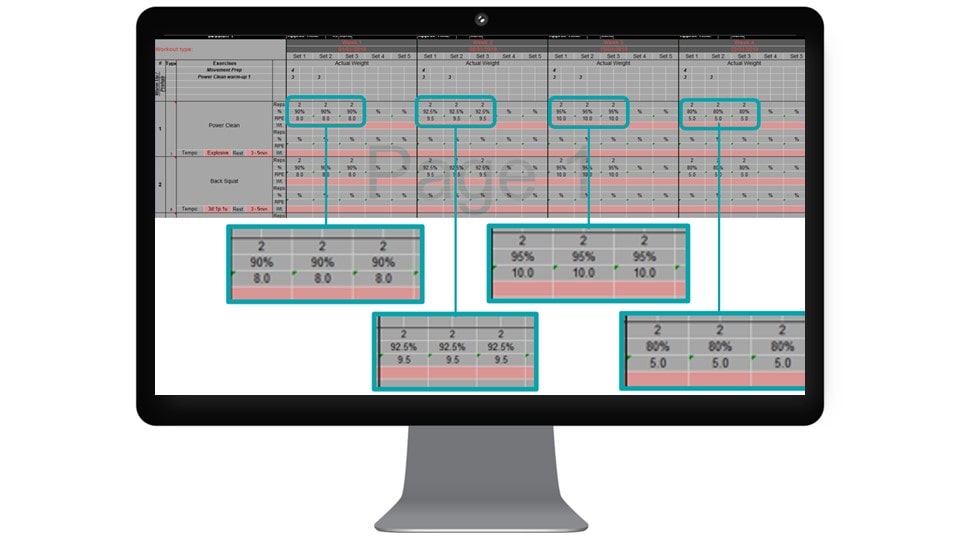 Over the course of a training cycle of four weeks, we have three weeks of increasing exertion and the fourth week is a deload week, where exertion decreases.

So, remember to stimulate, not annihilate!

Most people want to train with an RPE of 10 but that’s not always possible, and not always smart to do. Stimulate don’t annihilate.

How to use this training principle to find the best exercises

How often did I receive the question ‘What is the best exercise for … [fill in the blanks]?’

How often have you probably heard that question?

But I want to turn it around, and ask you to think ‘Adaptation first’, and depending on the adaptation you’re chasing, you have to find the right exercise.

Remember, adaptation is the main law of training.

This is another graphic from my course ‘Strength Training Secrets’ 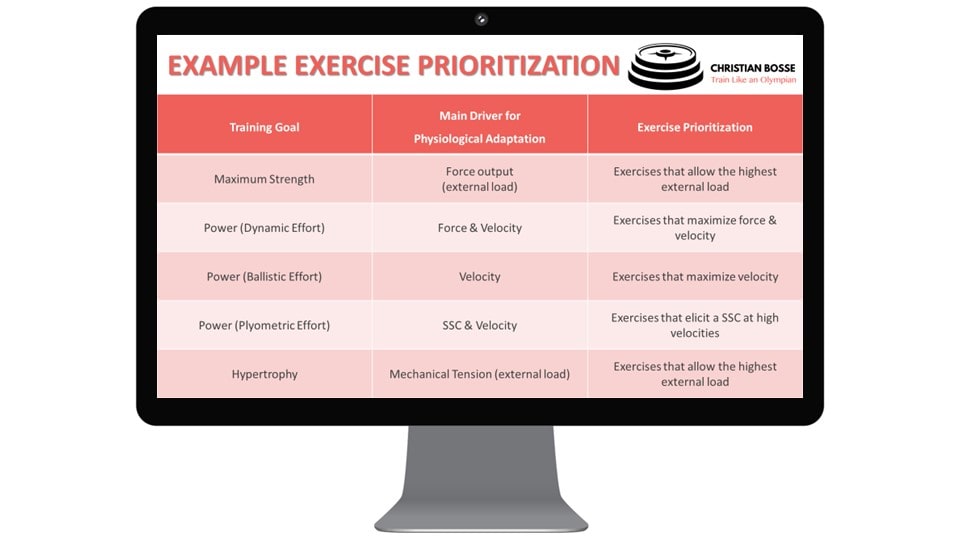 You can see the training goal on the left side and then see what is the main driver for a physiological adaptation related to that training goal.

This is a great example of how to prioritize exercises based on the driver of physiological adaptation.

So, you can see here, depending on the adaptation you’re chasing, you have to select different exercises.

Depending on the adaptation you’re chasing, you have to select different exercises.

Round-up of the training principle of optimal stimulus

The training principle of an optimal stimulus is based on the premise that training has to be above a certain threshold in order to elicit an adaptation.

The biological basis for this principle of training is the “Reizstufenregel”, the graded response rule from Wilhelm Roux.

When applying the graded response rule to training you need to be aware that the stimulus can be too high, and therefore elicit negative adaptation, too low and consequently elicit no adaptation, or optimal and elicit the desired adaptation.

To practically apply the principle of an optimal stimulus in your strength training (as just one out of many examples), you can use the Strength Training RPE (rate of perceived exertion) and the concept of RIR (repetitions in reserve).

in order to apply the principle of an optimal stimulus just think ‘Adaptation first’, meaning you should think about what is the main physiological driver for the adaptation you are chasing.

Now, you know that you have to set an optimal stimulus, in the next step, you need to understand, why training has to be progressive. Check out The Training Principle Of Progressive Overload