This page is an evergrowing library of sports science and strength & conditioning infographics.

What is the Acute to Chronic Workload Ratio

The optimal use of the ACWR can help practitioners to enhance performance by improving athlete freshness or readiness and reducing injury risk. But also by giving an idea, whether the athletes are training enough, or not.

There are two models which can be used to determine the ACWR.

For example, if the average workload over 7 days was 2000 units, and the average over 28 days was 1800 units, the calculation would be:

The second option for calculation is the exponentially weighted rolling average, this model determines older workloads as less important by using a weighting system. This model appreciates the dissipating influence of training workloads which were accumulated further away from the acute workload.

<0.80 – This is considered under training, and has a higher relative injury risk.

0.8-1.3 – This is considered optimal workload, whereby relative injury risk is at its lowest.

<1.5 – This is considered the ‘danger zone’ where there is a high relative injury risk.

The ACWR is a simple but crucial part of the training program for any athlete, using the data appropriately can help coaches optimize performance, and reduce the risk of injury.

This Sports Science Infographic is a summary of the article Acute: Chronic Workload Ratio from Science For Sport.

The SSC involves the following muscle actions: an eccentric phase, followed by an amortization (or translational) phase, and a concentric phase.

There are many potential mechanisms which underpin plyometric training, these include but are not limited to the storage and usage of elastic energy and motor coordination.

Plyometric training is not suitable for all athletes, these exercises often combine highly technical skills, with large forces. Athletes should, therefore, be suitably trained before starting plyometric training.

Plyometric training has been shown to improve many aspects of performance, for example, strength, power, speed, and jumping.

Plyometric training is used to develop power, speed, and strength due to the adaptations of the muscle-tendon system and nervous system.

This infographic is a summary of the article Plyometric Training from Science for Sports.

This strength & conditioning infographics outlines the stretch-shortening cycle (SSC), including what the SSC is, the underlying mechanisms, the difference between a slow SSC vs fast SSC, the energy storage and the neurophysiological model.

What is the SSC

The stretch-shortening cycle involves three stages. Firstly the muscle undergoes an eccentric action, secondly, the muscle undergoes a transition (also called amortization) phase, this is the time between stage one and three. Stage three is the concentric phase. An example of this would be stepping off a box, and landing, then immediately jumping to a second box.

Provided that the eccentric and amortization phases are fast, the corresponding concentric phase can utilize stored elastic energy like a spring. The faster the first two phases, the more elastic energy can be produced.

Mechanisms of the SSC

The mechanisms which underpin this effect are still not fully understood, however, a range of hypotheses have been suggested, with varying levels of evidence to support them.

In conclusion, understanding the SSC is an essential component of plyometric training. The SSC is a spring-like mechanism, that can enhance athletic performance in explosive sports, as well as endurance based sports. Well trained athletes often have highly developed SSC capacities, it is therefore worthy of attention in any training program.

This sports science infographic is taken from the article Stretch-shortening Cycle (SSC) from Science For Sports.

Generally speaking, this ensures that a lift is heavier in the easier portion(s) of the movement. Chains have a linear mass displacement, and therefore for each link added, there is an equal amount of weight added to the bar.

An example of Chain Resistance Training

Take the example of a bench press, as the bar is moved further from the ground, more links of the chain come off of the ground, adding more weight to the bar. In the bench press, generally, people are strongest at the top of the movement, as the bench press has an ascending strength curve the use of chains here ensures that the top range of movement receives a larger stimulus than a traditional bench press.

The practical application of using chains

Using chains with weight above 15% of your 1RM has been shown to elicit changes similar to those described above. Despite these results, there is still a lot we need to learn about chain resistance training, if this taster has got you interested, this Sports Science infographic is a summary of the article Chain-Resistance Training from Science For Sports. 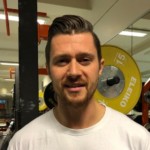 The infographics are created by Matt Solomon.