How to get a stronger Back Squat in 7 steps

But don’t worry, I have you covered.

In this article, I will give you a 7-step process of how to get a stronger Back Squat.

Before you ask how to get a stronger Back Squat, there are a few things you need to understand. One of these things is the fundamental training principles is called the SAID principle, the abbreviation SAID stands for Specific Adaptations to Imposed Demands.

It’s just a fancy expression of, if you want to get better at something, do it.

So, if you want to have a stronger Back Squat, you need to Back Squat!

How much more would you like to Back Squat and what is a realistic time frame? From my experience, our younger and less experienced athletes (they can squat their body weight) the sky really is the limit, they can make improvements of 20 – 50% within 12 weeks.

For our more experienced athletes (who can squat more than 1.5 times their body weight), they can make improvements of 5 – 10% in 12 weeks.

For the really experienced athletes (who can squat more than 2 times their body weight) the margin is small. They are happy if they improve from 195 kg to 200kg or from 215 kg to 222.5 kg (these are real cases). So we are talking 2 – 5% increases.

These numbers are a guideline, not a rule. I hope it can help you to set realistic expectations.

If you want to have an idea, where you stand, please check out the table on Back Squat standards. 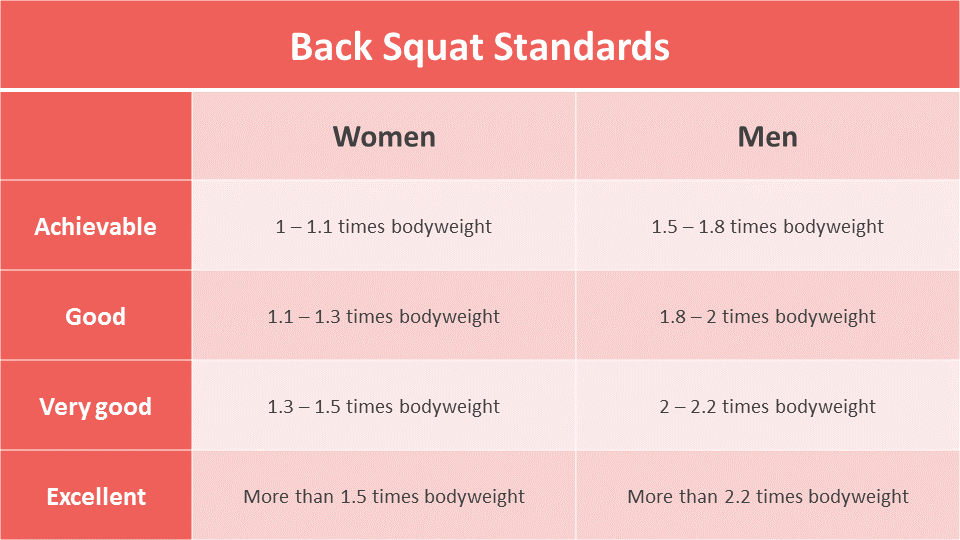 Step 2: Clean up your Back Squat Technique

The first step is to get your Back Squat technique right, you simply can’t squat heavy, if your technique is flawed!

If you are unsure, how to Back Squat correctly, have a look at the video and explanation How to do a Back Squat

Just by cleaning up your technique, you will experience that you are able to lift more weight, without necessarily getting stronger. Getting stronger will come in the next steps.

Just by cleaning up your technique, you will experience that you are able to lift more weight, without necessarily getting stronger. Getting stronger will come in the next steps.

I have elaborated a bit on that topic on the relation of technique and strength development in the article Tip: Do This 3-Squat Drop Set published on T-Nation.

Also check out the article 7 Powerful Ways to Increase Your Squat from Legionathletics, which emphasizes the proper Squat form as one of the first steps to get a heavier Squat.

Usually, your sticking point will fall into one of the three positions

Something I have learned from Bill Starr, one of the first Strength & Conditioning Coaches, or at least one of the first who started writing and publishing books, is, that the easiest way to detect your sticking point is through a 1RM (repetition maximum) test.

The easiest way to detect your sticking point is through a 1RM test.

Obviously a prerequisite for that is that you have proper Back Squat technique (see step 1) and are experienced with 1RM testing.

During the 1RM test, you will immediately see, which position is the most difficult part for you. Because this is where you will get stuck and miss the lift.

If you are not familiar with high intensities and 1RM testing, I would advise you to seek out for help. Get an experienced coach or training partner, who can evaluate your Back Squat form and give you the feedback.

I would like to say half the battle on knowing how to get a stronger Back Squat is won, once you know where your sticking point is. However, now you need to put the work in and find the appropriate exercises to attack the sticking point.

Remember the SAID principle, so all exercises we chose will still be Back Squat variations!

For the majority of athletes and people, the sticking point will be the bottom position and usually, they descend into a full squat, will come up a few centimeters, and then fail. In this case, you can choose for

Have a look at an example of 1.5 repetitions from Olympic finalist 2016 and World Champion 2015 Niek Kimmann in the video below

If the sticking point is in the mid-range, the athlete usually descends into a full squat, will come up half way to a knee angle of 90 – 100 degrees (definitely above a parallel position) will literally get stuck (he or she will try hard and push, but the bar just won’t move) and then fail. In this case, you can choose for

Back Squats from the rack:

Heavy Half Back Squats

Back Squats with accommodated resistance

In very rare cases, the sticking point is at the end position. The athlete usually descends into a full squat, will come up to a knee angle of 120 or more degrees, and can just not fully lock-out.

In this case, you can choose for

Back Squats from the rack:

Back Squats with accommodated resistance

Back Squats with accommodated resistance (with reverse bands)

The benefit of the reverse resistance bands is, that the athlete will get the feeling for how it feels to have a heavier load on his back than he or she is used to (the technical term is supra-maximal resistance).

You have polished your Back Squat technique, you detected your weak point and know how to attack your sticking point with the appropriate Back Squat variations. Now you need to plan the work and then work the plan.

Pretty straightforward, there is no point going into your next training and train ‘aimlessly’ with the exercise that is supposed to help you overcome your sticking point. You need to carefully plan that over at least 2 cycles of 4 weeks of training.

There is no point going into your next training and train ‘aimlessly’ with the exercise that is supposed to help you, you need to carefully plan that over at least 2 cycles of 4 weeks of training.

This is an example shows how a training could look like for an athlete with the sticking point in the bottom position. A 12-week plan, with 2 sessions a week. In session 1 the athlete trains regular Back Squats and in session 2 the Paused Back Squat. Intensity increases over 3 weeks and the 4th week is an unloading week. In week 11 the athlete tests the Back Squat 1RM.

Also, check out the article 10 Killer Tips To Boost Your Squat, which emphasizes a 2-times a week Back Squat routine to getting a stronger Back Squat.

Did you get a stronger Back Squat?

Did you accomplish your goal you have set in Step 1?

If you did, what worked well? What are the lessons learned?

If you didn’t, what did not work? What are the lessons learned and what are you going to do differently?

I personally think and evaluation can be short and precise and you don’t need to overthink and overanalyze. Compare the goals you set out with what you achieved and draw your conclusions.

An evaluation can be short and precise, you don’t need to overthink and overanalyze. Compare the goals you set out with what you achieved and draw your conclusions.

You are not analyzing for the sake of analyzing, you are analyzing to hit the ground running in the last and final step.

Use the lessons you have learned and repeat the cycle. For us, the Back Squat is a means to an end, which means our priority is the performance in competition and we schedule our strength training around the calendar of the competitions. Consequently, we repeat this cycle once or twice a year.

However, you should be depending on your goals and priorities to make the adjustments that work for you.

Concluding How To Get A Stronger Back Squat

In order to get a stronger Back Squat, you need to Back Squat.

If follow these simple steps, you will get a stronger Back Squat for sure.