How to Front Squat Heavy

My athletes and I have found success by following the process and interventions outlined in this article. 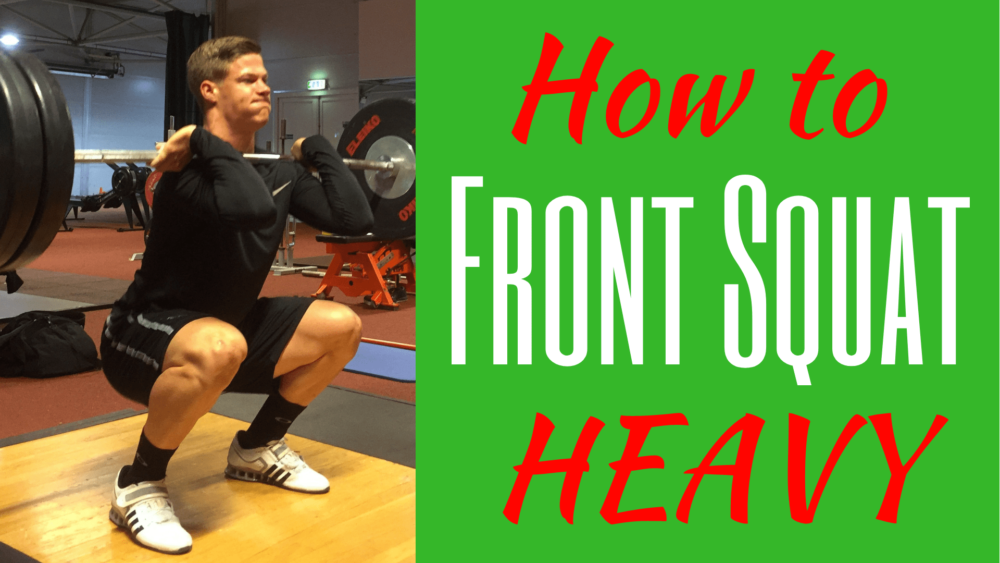 The first step to front squat heavy is to get an idea of what your Front Squat max is.

How To Calculate Your Front Squat Max

A very common dilemma when athletes include Front Squats in their training is the question ‘How much weight should I use for the Front Squat?’

So, the question stands out, how to calculate the Front Squat max?

There are accurate and less accurate methods to calculate the Front Squat max and they all serve the purpose of allowing to choose the right training weight.

The most practical method to calculate your Front Squat max is to do a 1 RM test. Pretty straightforward, right? The 1 RM test is truly most accurate, but unfortunately, it’s not always practical.

The 1 RM test is truly most accurate, but unfortunately, it’s not always practical.

For example, if you haven’t done Front Squat with higher intensities, above 90% 1 RM, you won’t be able to express the force needed to truly test the 1 RM.

Have you seen people in practice, that can use a certain weight for 3 repetitions and once they increase the weight just a little bit, they won’t be able to do it? This is exactly what I mean, they haven’t trained with intensities that are high enough to be able to do a single repetition with a weight they should.

In these cases, it’s more applicable to test for multiple RM and predict the 1RM from that.

You can test 3repetitions, 4 repetitions, or 5 repetitions and then use a conversion chart or conversion formula to predict the 1 RM. I have added a few links below to some useful 1 RM calculators on the net or you can simply create your own spreadsheet, which is my preferred method.

It’s worth noting, that the higher the number of repetitions you do, the less accurate the prediction of the 1 RM. So you don’t really want to predict your 1 RM from the 10 repetitions you performed.

In addition to that, the relation between repetitions performed and 1 RM can vary upon

Let’s go through it.

Predicted 1 RM’s are useful and easily implementable but have to be treated with care.

I have outlined this in more detail in the article

Again, this is not the most accurate, but it is a good indication of a starting point and doesn’t require to test, before getting started and you can easily adjust loads along the way.

One method that has gained popularity in recent years is to calculate the 1 RM based on measuring the velocity in the exercise/lift at submaximal sets and you will get a fairly accurate prediction of your 1 RM. With the advancements in technology over the last years, these devices have become more affordable and accessible to anyone. Most of these devices have the 1 RM prediction built-in, otherwise, you can record the speed at a given load and then convert it into a spreadsheet.

‘Fixes’ How To Front Squat Heavy

If you want to Front Squat heavy, there are different ways to achieve that. From a coaching perspective, there are some ‘immediate fixes’, some ‘quick fixes’, and some ‘fixes’ that take a little bit longer.

Obviously, everyone wants the ‘immediate fix’, the magic wand you wave and all is sorted out.

An often-overlooked factor when lifting heavy loads is the mindset and preparation for a lift, how you approach the Front Squat (or whichever exercise you are about to do). In other sports it is quite common to have routines, for example,  tennis players practice the routine(s) between points to be fully ready when the next point starts. The same concept can be applied to develop a routine on how to approach a maximal or near-maximal weight.

Have you seen people being in a conversation until the moment they grab the bar or in a squatting movement, they rack the bar and while walking out of the rack and adjusting they still talk until the moment they initiate the lift? I can imagine this is not the best preparation for a lift, to phrase it carefully.

This can be fixed immediately.

My recommendation, determine an area that is the area for serious business. If you do an Olympic Lift or variation of the Olympic Lift (Power Clean or Power Snatch), the moment you step on the platform is when you need to be ready. The same applies to squatting, the moment you step in the rack or better when you approach the rack, you need to be ready.

The moment you approach the rack, you need to be ready.

Once you have mastered that it is time to look to take it a step further and develop your routine on how to prepare for a lift, which I will cover in a separate article.

Quick fixes are technical key points that can be fixed quickly. When I say quick, it means within one session or a few sessions.

For the Front Squat quick fixes, most of the times are elbow position, breathing mechanics, stance or posture.

These technical flaws can be addressed with cues or corrective exercises. As an applied example, a very common problem in the Front Squat is maintaining the arm position and elbow throughout the Front Squat with a Clean grip. Assuming there are no mobility or flexibility issues with the wrist, a cue to fix the problem could be to imagine to balance a coin on the elbow without letting it drop or to imagine to have pointers in the elbow which point straight ahead and have to remain to point straight ahead throughout the lift.

A corrective exercise, in this case, could be the Handsfree Front Squat, which forces the athlete to keep the arms parallel with the ground.

Have a look at the following examples.

In this video, you can see Kevin van den Groenedaal performing regular Front Squat, with a Clean grip. If you look at his elbows in the bottom position, they tend to drop, which makes it much harder for him to balance the weight on his front shoulders and a lot of the weight he has to hold with the strength of his arms and hands (not ideal).

You can see the same pattern here, double Olympian and 2019 World Champion Twan van Gendt got stuck in the Front Squat weight he could lift. he felt like he could do more weight with the strength of his legs, but felt it was difficult to hold the weight. Something that you can see, in the bottom position, and once he starts the ascent, his elbows drop.

That gave me the opportunity to introduce the Handsfree Front Squat to fix that pattern. As you can see in the following video, he surpassed the weight he used to do in the regular Front Squat.

Other ‘fixes’ To Front Squat Heavy

This is what we have to deal with most of the time and the word fix isn’t really adequate.

While the root cause of some technical issues or mindset can be addressed and changed with ‘immediate fixes’ and the ‘quick fixes’, some root causes take a bit longer to fix.

For example, if you really need to get stronger to Front Squat heavy, you need to go through thorough thorough programming and have to put the work in over weeks to see physical adaptations to allow you to get the heavy Front Squat you desire.

Please check out the article The Holy Grail of Strength Training – Sets and Reps, that outlines the most important programming variables.

If you want to Front Squat heavy, you need to prioritize the Front Squat in your training.

Let’s have a look at what a heavy Front Squat is, by looking at some benchmarks.

I have written on benchmarks for the Front Squat in the article How much should I Front Squat which are numbers I have found to be true from my experience and working with athletes, that use the Front Squat as a means to improve in their sport.

Benchmarking is a good thing and as much as I like the idea of having a benchmark, it should not detract from the fact that technical execution and mastering the Front Squat technique comes first.

Benchmarking should not detract from the fact that technical execution and mastering the Front Squat technique comes first.

The benchmarking process I use starts with mastering the Front Squat technique where the athletes have to check all the key points required to perform a Front Squat properly and then progress to a percentage of body weight. 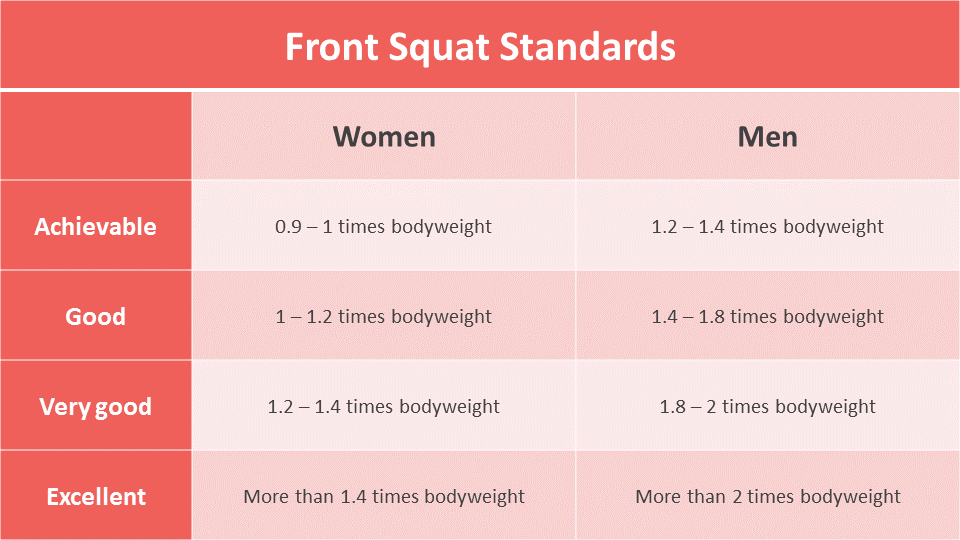 My last advice would be, don’t get married to certain numbers! Not everyone can achieve the same strength levels and your ability to achieve strength levels depend on a variety of factor, including gender, you as a person and the sport you are competing in.

For more details about the appropriate Front Squat technique, check out the article

How To Front Squat Heavy Conclusions

If you want to Front Squat heavy, you need to calculate what your Front Squat max is, which can be done via direct or indirect methods.

Once you know your Front Squat max, you need to determine what keeps you away from a heavy Front Squatt and then apply the appropriate ‘fixes’ I have outlined.

Set yourself a goal, using the benchmarks I have provided or customize the benchmarks to your needs. Work hard to achieve the goal, while emphasizing good Front Squat technique throughout the process.