What is the prime mover in the Back Squat?

The Back Squat is one of the most complex strength movements, and not always easy to execute. In order to understand the movement, people often ask ‘What is the prime mover in the Back Squat?’.

This article and video looks at

What is the prime mover in a Back Squat?

If you are like most people when you think about prime movers, what comes to your mind first?

I have discussed this previously, that my approach is to look at movements rather than muscles. There is the expression, that resonates with me ‘train movements, not muscles’, I always thought it’s attributed to Vern Gambetta, but maybe it’s not.

This approach also helps us to understand the prime movers in a Back Squat.

But wait a minute, are prime movers muscles?

Yes, they are, however, I start looking at the movement, and once I know, which movement occurs, I can determine the prime mover.

This example outlines a common flaw when training a movement without knowing the correct muscle function.

Hence, if you are intending to train the pectoralis major, what most people intend to do when, they perform this exercise, then the internal rotation at the top of this movement is counter-productive.

What is the prime movement in a Back Squat?

Consequently, the question is what are the prime movers that make these movements of hip flexion and hip extension, knee flexion, and knee extension, as well as ankle flexion and ankle extension possible?

Agonistic muscles are the muscles that actually do the prime movement.

Synergistic muscles are the ones that support the prime movement.

Antagonistic muscles are the muscles that are opposed to the prime movement.

Check out this short explainer video

What are the prime movers in a Back Squat?

Let’s have a look at the different movements and the agonistic muscles and antagonistic muscles. And I want to refer, what I have mentioned earlier, that the force application occurs during the dynamic concentric movement of hip extension, knee extension, and ankle extension.

The biceps femoris acts as a synergist.

The antagonistic muscles during the knee extension are the hamstrings, which consist of 3 muscles, the semimembranosus, the semitendinosus, and the biceps femoris. The biceps femoris also crosses two joints and is responsible for knee flexion and hip extension.

The antagonistic muscle during the ankle extension is the Tibialis anterior.

To sum up, the previous outline check out the table 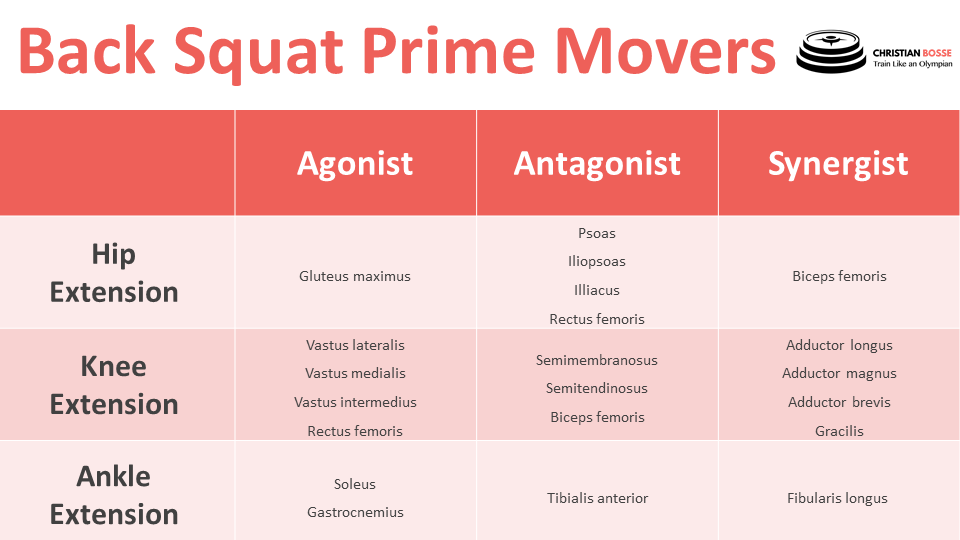 Nice overview, but is it all that simple?

By no means. If you looked carefully you could already see, that some muscles act as an agonist and antagonist. In addition to that muscle functions and biomechanics are much more complex, just check out the example of the Lombard’s paradox, which explains that under certain conditions a ‘knee flexor’ such as the hamstring can also act as a knee extensor.

I particularly like this video, as the graphic used in the video shows the circumstances under which the hamstring acts as a knee extensor.

Is the hamstring a prime mover in the Back Squat?

I know the topic of hamstring activation and hamstring involvement is highly debated, check out Greg Nuckols take on this topic

As well as his article Hamstrings: The Most Overrated Muscle for the Squat 2.0

It has been shown through the Lombards paradox, that the hamstring can act as a synergist and assists knee extension during high-speed running.

Consequently, the same is true for the Back Squat, where the hamstring can help assist the knee extension. The hamstring consists of 3 different muscles; the biceps femoris, which goes over two joints, the knee joint and the hip joint, the semimembranosus and semitendinosus, both of them cross 1 joint, the knee joint.

Last but not least, I have always considered myself as a practitioner and always looked pretty closely at the advice of other practitioners.

When I was a young and aspiring strength & conditioning, I read the books and articles of Bill Starr, one of the early strength & conditioning coaches, and one concept, that stuck with me ever since I read this book is the concept of muscular activation during certain exercises. He said, a simple and easy way to figure out muscular activation, is to pay attention to where you feel soreness the next day. And if you want to take it a step further, he mentioned, if you believe the hamstring is not involved in the squat, you should try to squat with a hamstring strain.

What is the bottom line?

For sure the studies of muscular activation hold true, however, it’s worth adding a bit of common sense and practical-based evidence.

For sure the studies of muscular activation hold true, however, it’s worth adding a bit of common sense and practical-based evidence.

What are stabilizers in the Back Squat?

So, what are these stabilizers?

The main stabilizers are the muscles of the trunk, especially the erector spinae, the back extensor, which allows the upright posture and maintains the upright posture. Next, to that the abdominal muscles are activated to a certain extent, as well as the deeper lying trunk muscles, that make the valsalva maneuver possible. In simple words, the valsalva maneuver means you hold your breath, which creates an intra-abdominal pressure and helps to stabilize the spine, and ultimately allows you to lift higher loads.

How important is core stability for the Back Squat?

A common question, how important is core stability for the squat?

As I have outlined, the trunk muscles are important, as they connect the lower body with the upper body, and a chain is only as strong as its weakest link.

The question that stands to reason is, how do you train your trunk (or core) to prepare it for squatting.

And as I mentioned above, if we use our common sense we can ask ourselves, if unloaded body weight exercises in a prone or supine position (lying on your stomach or on your back) will prepare you for a Back Squat with 1.5 times your body weight or more in a vertical position?

Does an unloaded body weight exercises in a prone or supine position, prepare you for a Back Squat with 1.5 times your body weight or more in a vertical position?

What about other stabilizers?

In order to support the bar on your back, you need to have a strong back.

Which back muscles are important?

The trapezius, where the bar lies on, the rhomboids, the posterior shoulder, the scapulae muscles and the latissimus. In order to understand that concept a little bit better, I really like the cue from Dave Tate, from Elite FTS, when he spoke about the importance of the back in the Back Squat and where he cues, that you need to put tension on your back from all 4 hemispheres.

Think about putting tension from the top, from the bottom, and from the sides, like top-down, bottom-up and then from the outside to the inside.

If you want to squat 200+ kilos, you need to have an upper body to support that weight.

A practical example of this.

Can the prime mover be changed through different foot positions

Images like this seem to be popular on social media.

What is my take on it?

Well, it is true, it has been shown in studies that that is true. However, the way I approach training, is that I wouldn’t worry too much about foot position for the simple reason, that you need to find a stance and a foot position that allows you to squat comfortably, safely and enables you to lift the highest load.

And coming back to the image from above, I would probably not advise either of the stances, as they all seemed to be a bit awkward for the majority of people, and forcing someone into one of those stances will lead to a drastic reduction in external load, and put them at risk to not be able to maintain proper squat technique (which is just another expression for, asking for trouble).

Again, if I use the example of my track cyclists, with none of them I force them into a specific stance. We focus on finding a stance, that allows them to squat comfortably with the best possible technique, and all of them have pretty big legs, and this is the result of the loads they are able to squat.

The main driver for adaptation for greater strength, and hypertrophy, is the mechanical load. Consequently the higher the external load you can squat (with appropriate technique), the higher the chance for gainz in muscular hypertrophy and strength.

What is the appropriate technique? Check out the mini tutorial on Back Squat technique

Or check out the full article on Back Squat technique

Concluding, if you want to get stronger or bigger, don’t worry too much about foot positions and stance width, much rather worry about which stance enables you to squat comfortably, safely and allows you to progress loads over time.

The main driver for adaptation, strength, and hypertrophy is the mechanical load, so don’t worry too much about foot positions and stance width, much rather worry about which stance enables you to squat comfortably, safely and allows you to progress loads over time.

Concluding What is the prime mover in the Back Squat?

Then take a look at agonistic muscles, the synergistic muscles and the stabilizers that make the squat movement possible.

Don’t worry too much on foot position and stance width to alter muscular activation, much rather focus on proper squatting technique and squatting heavier and heavier loads over time, as the main driver for strength and size is the external load.