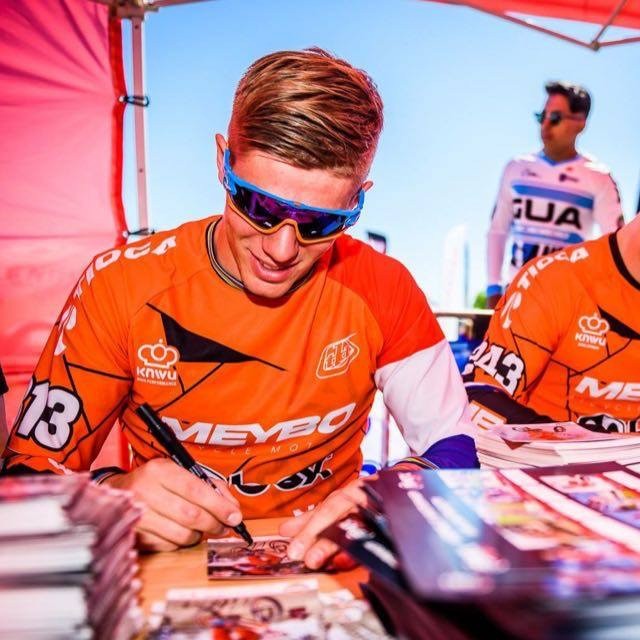 Niek Kimmann (born 20th May 1996 in Lutten, Netherlands) started riding his BMX bike from the age of 7 when a friend asked him to join the local BMX club. Growing up on his parents’ farm, Niek practiced his BMX skills either in the local club or on the backyard of his parent’s farm, where they built a BMX track.

As a youth athlete, Niek was never at the top of his age-group, neither on a national level nor international level. But things were going to change.

Selected into the Junior National Team 2012

Fast forward to 2012, Niek was selected as one of 9 promising BMX riders to join the newly established BMX Junior National Team.

Things have gone quickly ever since, due to his potential, determination and work ethic, Niek got drafted into the BMX Senior National Team only 1 year later (2013).

In 2014 Niek became double world champion in the junior category, winning the time-trial and the main event. He got selected to represent his country at the Youth Olympic Games in Nanjing, China, where he won the bronze medal. The competition format at the Youth Olympic Games consist of 5 different disciplines (BMX, time-trial road, Cross- country, Mountainbike race, a Mountainbike eliminator race, and a road race), Niek participated in 3 out of the 5 events, where he dominated the BMX and his teammate participated in the other 2 disciplines.

In 2015 Niek won the second World Cup of the season, in Papendal. Not only came this world cup win as a surprise to most people, since he never qualified for a world cup final before, he also won this world cup in an impressive way. What was impressive? He selected voluntarily the outside lane (lane 8), which is considered the least favorite spot to start from, and he won the race. 2 months later, Niek became World Champion in Zolder, Belgium. Niek finished the 2015 season as number 2 in the world ranking.

In 2016 Niek won the time-trial event at the World Championships in Medellin, Colombia and missed the title-defense of his World Championship title by a centimeter, become second in the main event to claim the silver medal.

Niek, alongside Twan van Gendt and Jelle van Gorkom, went to the Olympic Games 2016 in Rio. A heavy crash in the 2nd out of 3 heats in the quarter-final hampered him to continue to bring out his best performance. After the heavy crash, everyone expected Niek to pull out of the competition, due to the severe pain and injury. Niek pulled himself together and started in the 3rd heat of the quarter-final and finished 3rd in this race to book a spot in the semi-final.  The heavy injury left his mark, however, Niek was still able to qualify for the Olympic final and finished 7th.

The disappointing result at the Rio Olympics 2016 and a crash in the preparation for the 2017 season resulted in Niek’s most disappointing season 2017.

Niek recovered from 1 and a half disappointing years to come back stronger than ever before in 2018, winning 4 out of 8 world cups and finishing the season as world number 1.

More details about his up’s and down’s check out the interview with Niek Kimmann.

Working with Niek has always been a pleasure, so it makes me even more happy to see the steps he could take in his physical development.

Some of the impressive feats of strength and power are showcased here.

A single-legged Power Clean from the blocks

As much as Niek loves riding his BMX bike, his least favorite exercise is the Bulgarian Split Squats, just check out his reaction

Not a real training impression, but a picture says more than thousand words, Niek carrying his bike after a crash at the Rio Olympics over the finish line to secure a point, that took him to the next round

Check the full story about the crash

Where to find Niek

You can find Niek on different places on the web, find his social profiles below.

GET IN TOUCH WITH NIEK

You want to ask Niek a training question, any other question or get in touch with him? Put it in the box below and leave the best email address where you can receive a response.